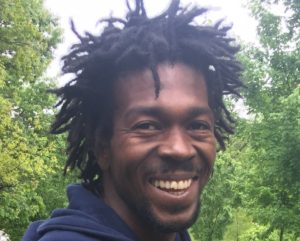 Cote d’Ivoire, otherwise known as Ivory Coast, was embroiled in back-to-back civil wars from 2002-07 and 2010-11. For Ahmed, a poet and actor just coming onto the scene in Abidjan, Cote d’Ivoire’s commercial capital, the war shaped his life, art, and future.

Ahmed was 9 when he first performed in a school play and knew he wanted to be an actor. His teenage years were immersed in American rap and Kung-fu movies, both of which found immense popularity with the youth of Abidjan’s metropolitan streets. Ahmed and his friends started writing raps relevant to their lives and the lives of the street children in their midst. A chance encounter with a renowned artist Binda Ngazolo showed Ahmed and his group that in order to make their raps more attractive to the youth in Abidjan, they needed to steer clear of the grammatically correct French in which they’d written their rhymes, and use the common vernacular of Abidjan’s nouchi language, a slang comprised of French, English, Chinese, and African languages used extensively among the Ivoirian communities.

By combining nouchi  raps with ziguehi dance, Ahmed’s group transformed street culture into art. “Voggo Soutra” their collaborate group of slam poets, rappers, and story-tellers soon found themselves travelling Europe and Canada. His experience in Voggo Soutra lit a fire within him to show youth that you can turn street language into poetry and street violence into art. Ahmed has worked as an actor at Abidjan’s Binkadiso for the last 7 years and is currently on sabbatical in the United States.

Ahmed’s piece “gban gban” is a visual representation of life in the midst of war. “Gban gban” means fire/ war/ tension in nouchi. The skulls on the canvas are shaped like the continent of Africa, where civil unrest is still common and millions of children live under threat and gunfire everyday. The soldier on the left of the canvas is comprised of numbers, pieced together to form the man and his weapon, representing the thousands of soldier boys who’ve taken the path of war for hundreds of generations. “Kiva nous sutra” asks “who is going to help us?” 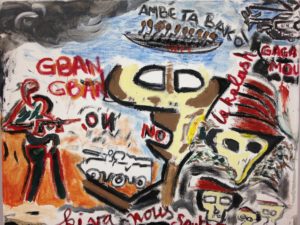 I am an artist!